This post comes at you about a month late because life happened, but onward we press. Now that I’ve shown you how the Sorting system is stupid, we’ll finally discuss how fans have reformed it and how you can choose your House.

As most people reading this post know, for years before Pottermore existed, the Internet hosted many Sorting quizzes, most of them frustratingly fixated on your favorite color and whether you would do something obviously evil. (Though in all seriousness, half my family does read while brushing or flossing.) 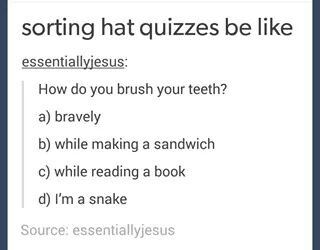 Pottermore changed all this with their quizzes, which produced some great Sortings but have limitations. Most importantly, the computer can’t evaluate why you choose your answers, and some of the questions, such as “left or right?” seem more random than reflective of personality.

Additionally, because Pottermore has more than one quiz, the result depends in part on which quiz you take. For example, one of the current quizzes more directly targets the Ravenclaw in me, so when I take that quiz, I’m more likely to be Sorted into Ravenclaw.

Still, Pottermore drove the conversation forward by quasi-officially Sorting real people, and this Sorting led people to redefine the Houses. Most importantly, Hufflepuffs undertook a massive PR campaign focused on proving that people who value kindness, justice, and friendship have their priorities straight.

JK Rowling subsequently highlighted Hufflepuff through Fantastic Beasts and Where to Find Them, which stars Hufflepuff Newt Scamander.

Meanwhile, Slytherin was redeemed both through proud Slytherins showing they’re not inherently evil and through The Cursed Child, which focuses on Slytherins Albus Potter and Scorpius Malfoy.

Most fans have since developed intuitive ideas of what each House’s general personality is. Others have tried to develop logical systems that more reliably Sort individuals and describe personality. For example, consider Tumblr posts like these: 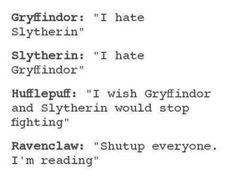 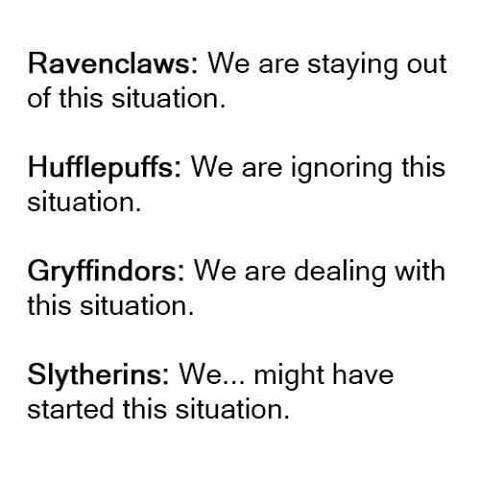 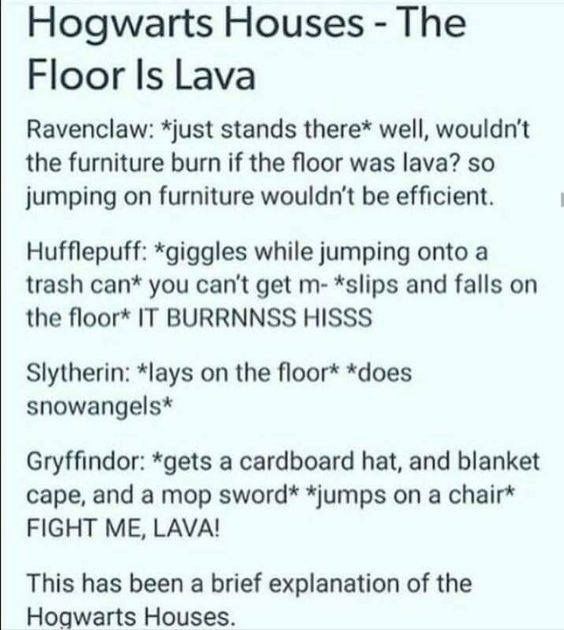 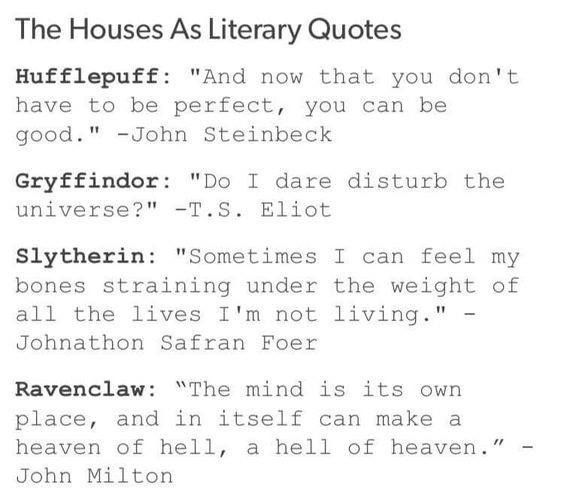 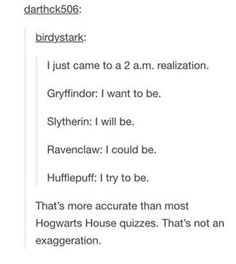 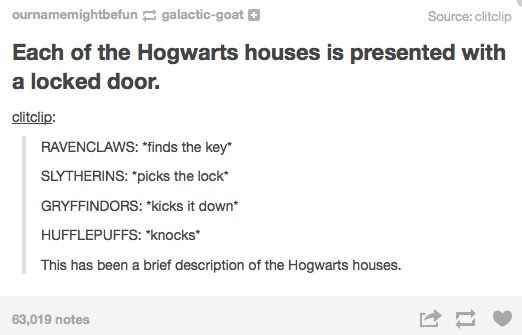 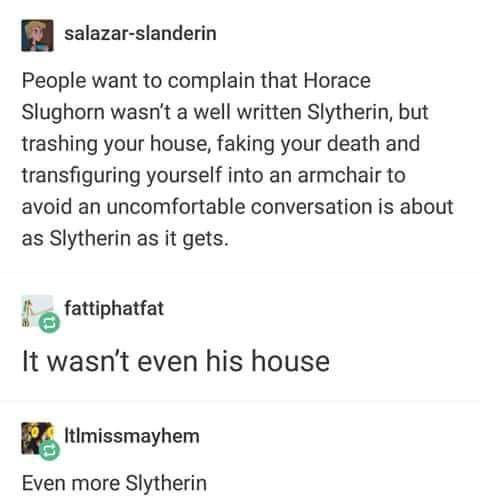 I don’t agree with all these analyses, but you get my point.

Decide Your Destiny, or Something

Now that we’ve got that explanation out of the way, here are four steps you can take to discover your House.

While some people consistently Sort into a given House, I’ve been Sorted into every House on Pottermore. For years I’d periodically delete my account and recreate it so I could take the Sorting quiz again. I was hardly ever Sorted into Slytherin, but Gryffindor, Hufflepuff, and Ravenclaw were all frequent results.

However, a few months ago I got fed up and deleted and recreated my account about 20 times in a row so I had a bunch of data points from a single day.

Once again, I was Sorted into several different Houses. However, the process of taking the test was very Ravenclaw, and I decided that my favorite Pottermore quiz tended to Sort me into Ravenclaw. I also like their common room the best because books.

Another popular quiz you can look at is the hybrid Hogwarts House quiz from Buzzfeed.

Fan perceptions of the various Houses differ, but you’ll find some common threads. For example, while the idea of Gryffindor appeals to me, I’ve found that the stereotype of a Gryffindor is a person who drives me up the wall.

Case in point: once for a company conference, each team had to draw a maze in Sharpie. I had to work hard to convince my team that they couldn’t draw a maze right the first time and that they needed to make a draft in pencil first. Fortunately, I convinced them and thus prevented the disaster that happened in pencil from being our final product, but I felt like I was babysitting that whole afternoon.

I’m not sure I could socially thrive in Gryffindor. Really I’m just surprised Hermione didn’t punch someone sooner than she did.

I also like planning and methodology more than the average Tumblr Gryffindor does, and in articles such as this WritersDomain article about writing style by House, I relate to the Ravenclaw traits most.

Still, a part of me feels I should be in Hufflepuff. After all, Sorting is a stupid, exclusionary idea, and everyone deserves an education. Justice, friendship, and kindness are the right priorities. Though you don’t have to be a Hufflepuff to have those priorities.

However, setting aside all the stereotypes about toast and pancakes, I’m not sure I’m people-oriented enough for a Hufflepuff. Sure, Hufflepuffs aren’t necessarily gregarious, but my judgmental, elitist, hit-you-hard-with-the-painful-truth streak tends to shock and disturb Hufflepuffs, so I’m not sure Hufflepuff is right for me.

Hufflepuffs, whether social butterflies or not, tend to have a finesse with people that I just don’t.

While no Sorting system is perfect or scientific, fans have created some pretty awesome ones. I recommend you take the two-question Sorting quiz and Sort yourself based on the Sorting Hat Chats system.

I struggled with both Sorting methods because I tend to synthesize intuition and logical thought under the belief that either method alone will lead me the wrong way. But after studying the models and performances of the Sorting Hat Chats system for a while, I decided I’m a Gryffindor primary and a Ravenclaw secondary. In other words, I’m guided by my gut instincts but execute and support them using Ravenclaw methodology.

I sometimes test as a Hufflepuff or a Slytherin because I’ve incorporated some of their values into my moral system, models, and performances, but my intuitive draw toward Gryffindor and Ravenclaw is supported by the Chats system.

After all this research, you have to choose what you think. Which House best reflects you? Which House will help you most?

In the end I decided on Ravenclaw for practical purposes. I am motivated by my gut instincts and intuitive morality, but because that part of me already exists, I think I can improve myself most by developing my Ravenclaw skills, which allow me to better evaluate, check, believe in, and act on my gut feelings.

This choice is opposite from Hermione’s, as she decided that she was good on her Ravenclaw skills and wanted to develop her morality system more.

And thus my Sorting journey comes to an end — at least for now. What House(s) are you in? Why did you choose them, and how do you think your chosen House will help you develop as a person?

I'm a writer, editor, teacher, and reader. I like books and human decency. Also fruit. Berries are the best. View all posts by Kenna Ainsley